With the baby’s due date rapidly approaching, I decided it was probably time to get that changing table and crib build. We were looking for something that could be functional beyond its life of a changing table so I chose to make another one of Ana White‘s designs, the Emerson Buffet Table. On her site you can also find a topper for the table to fit your changing pad into, but we decided to forgo the topper as our pad had some rubber pads on the bottom and straps to tack to the back of the table so it won’t slide around on us.

The biggest problem I had with the table was with the doors because I chose to use wood rescued from some discarded wood pallets. Getting a decently close fit was awkward due to the irregular widths of the wood. Additionally, some of the wood from the pallets warped a little after finishing them. To solve this, I added a second door catch to the botto
m of the doors to straighten them out while the doors were closed.

After finishing the changing table, I took the plans I had for the crib down to the lumber yard to figure out how much this thing was going to cost me. The quote came in at over $180. The crib was going to be one of my more ambitious projects requiring tools I wasn’t even sure what they were. Between work, a new baby on the way, and being in the middle of purchasing a house, my time has become extremely limited.  After consulting Katie, we opted to buy a crib online. It is probably for the best for everyone involved.

Below are some pictures during the building process of the changing table. 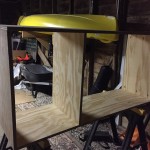 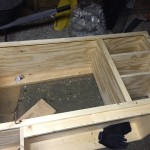 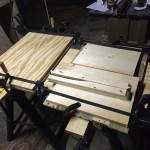 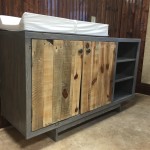